LED lighting strip is a popular for cabinet item display lighting, ceiling edge, lighting on furniture edges. The strip is thin and flexible making it easily to fit onto tight space/corner. 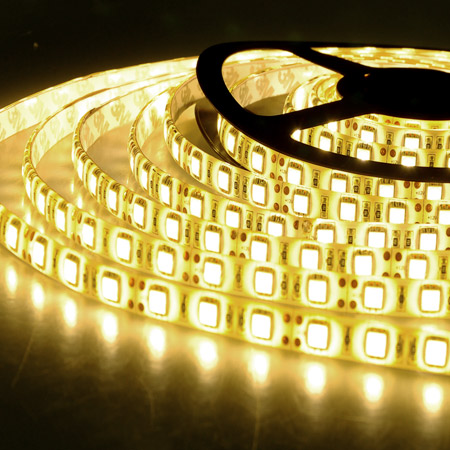 LED strip is very safe compared to many other types of lighting which use 230Vac. It uses low DC voltage 12V or 24V. You can touch the expose copper contact without getting any electrical shock. Many aquarium enthusiasts install the LED strips for their water tank’s lighting too. These strips do not cause an electrical shock circuit is they are accidentally in contact with the water. Water can conduct electricity, but because of the low voltage and current, if the strip is submerged in the water, the only reaction will be corrosion on the copper metal surface over a period of time.

Unlike the ceiling lighting and bulbs, which comes in those range of typical lighting colour warm-white and cool-white, it is common to find a wide range of colour for LED strips. Colours like red, green, blue, white, purple, yellow, magenta, etc… are easily available. Many people use these LED strips for decoration light as well. There is even LED strips with RGB LED which can generate a wide range of colours. Some are also known as the rainbow lighting. To generate the rainbow colours, you will need to drive the special LED strips with a controller.

The width of a typical LED strip is 12mm. A roll of LED (one reel) is normally 5m. They are soldered to 5x 1m flexible LED base and can be cut into a smaller section of 50mm. Both end of the strip usually ends with a wire pair for connection to the power supply.

A typical LED strips can contain about 30-120pcs of 5050 LED per meter. Typical specification for 5050 LED single color model can be,

LED strip without protective cover may have oxidation found on the surface of the metal copper. This is especially if the LED strip is exposed to a moist environment.

The LED strip is very flexible and allow the user to deploy lighting in many places where space is very tight. With the help of these strip connector, a user will just need to clip to join up the strips instead of soldering the strips.

LED strip uses low DC for the power supply. It is safer to handle LED strip compare the rest of the lighting. Touching the strip will not cause harm to our body. It will not short circuit or explode when the strip is accidentally soaked in water.

Most strips use 12V as a standard. For 12V LED strip, the intensity between the first and last LED can be noticeably after about 10m in length. There are also strips that are designed to use 24V, which allow strips to be connected longer without the intensity lost.

The power required by the LED strip is different. It depends on the type of LED (3825, 5050, single colour or RGB), the density of the LED (LED spacing), the length of the LED strip. For example, a 60pcs 5050 LED per meter will need a power of 12V 1A. If you intend to install 2 meters of the LED strip, ensure that you power supply is at least of about 12V 2A. For RGB LED version, you will need more especially when the white light is operating (all RGB lights are activated).

These are single colour LED strips. They can easily be identified by the 2 wire (red, black) found at the end of the strip.

The following provide some ideas where the colour LED strip can be deployed in your office or home to create the ambient that you want.